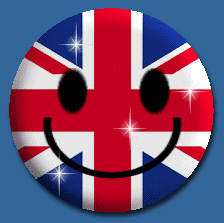 British humour is considered different from other countries’ humour and it is true, in many situations a British joke doesn’t translate well into for example Spanish. But what exactly makes it different? At the base of British humour are sarcasm and irony. Brits love irony because they are much too polite to be direct. When for example a bus arrives late, no one will tell the driver to his face that he is terribly late. It is much more likely to hear a Brit tell the driver something like: “I love it when the buses drive on time!”. He or she still means how terribly late the bus is, but by saying it ironically they can criticize without being offensive. And it works, all Brits will understand the irony, including the driver.

Brits like sarcasm and irony so much that it is almost always present in their conversations. And so are understatements and self-deprecation. All of these together can make talking to a Brit really funny. Even more so because most of them know how to keep a straight face while joking. Unfortunately it can make understanding a Brit for a foreigner really difficult too, because when you’re focusing on the main thread of the conversation, all these encrypted remarks will confuse you endlessly especially when the facial expression doesn’t tell you if these remarks are serious or not. So next time you hear a Brit saying something that really doesn’t make sense to you, he is probably joking.

Let me give you an example of an unexpected answer a Brit can give you to the seemingly normal question «how are you?»: «Fat, old and ugly»! Few Brits will resist a witty answer to a stupid question: you see a Brit fishing and you ask him if he just caught that fish that you see in his basket. He may say: “No, it’s a plastic model that I carry around for fun…”

Brits use a lot of understatements: «He is not too thin» while talking about an obese person, or «He knows a little about running a company» while talking about a successful CEO. Did you ever notice that there are in fact a lot of understatements in British English? If you pay attention you will hear “actually”, “a bit”, “quite” and “rather” all the time!

Brits love self-deprecation. They like it so much they tend to admire people who use it a lot more than people who boast about themselves. What is self-deprecation? According to the Cambridge dictionary: “Trying to make yourself, your abilities, or your achievements seem less important.” Here’s a funny example: you’re looking for a good hairdresser, so you ask a stranger on the street for one and he or she says: “Would I look like this if I knew one?”

One last type of British humour that I want to mention is teasing. Brits tease a lot, but it is never meant to hurt someone, it is more a signal of acceptance and admiration. A Brit would never tease you if he didn’t like you. So don’t worry if you do something clumsy at work and your boss shouts out in exasperation: “Oh you can’t get decent staff these days!”

I hope you will be able to understand British humour after reading this. I’m afraid there’s no course in seeing the fun in British humour, but I think you will see it if you’re exposed to it long enough! And if not, you will most certainly improve your listening skills in the process.

When you are learning a language it is very easy to be misunderstood. For this reason I want to talk about «please», «thank you» and «sorry», without a doubt the three most important words in English communication.

In English culture it is very easy to offend people by speaking to them without the proper politeness. You don’t say «sit down», that would be an order! By saying «Please sit down» it becomes an invitation to join you. Often foreign travellers don’t know this and they encounter unfriendly faces or responses to simple questions like: «Where is the railway station?» or «Can we have a double room?». It makes a big difference if you ask the same questions in a polite way: «Please, could you tell me where the railway station is?» (or even better: «Excuse me, could you please tell me where the railway station is?») and «(Excuse me) can we have a double room, please?». Without the please something is missing. If you enter a pub and order «a beer and a coke» it is possible that the bartender keeps looking at you because in his opinion you haven’t finished the order. It’s not that he is consciously waiting for you to say «please», but he is expecting you to order something more like a bag of crisps. By saying «A beer and a coke, please» you make it clear that that will be all for the moment. And when it’s time to pay, you of course ask: «Excuse me, can I have the bill, please?».

Sorry is another essential word, especially in British English. Never say: “What?” or “What did you say?”. If you don’t understand people say: “I’m sorry?”, or: “I’m sorry, but I don’t understand”, otherwise it sounds really rude. A second situation in which the use of sorry is important is as an apology. Always say sorry when you bother people, even if you can’t help it. So for example when you pass in front of people in a cinema, or if you gently push aside someone’s shopping trolley in a supermarket, or if you’re leaning towards someone in an elevator in order to push a button. And don’t be surprised that when you by accident step on someone’s foot, he or she, so the victim, will withdraw his or her foot saying “sorry”! But please don’t forget too say so yourself too! 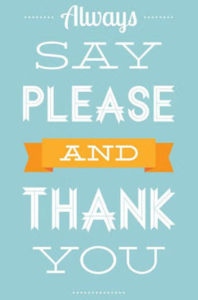 Last but not least you have to use “thank you” a lot. It’s a very useful phrase when someone does you a favour. If you don´t say “thank you” people will think you have bad manners. So say “thank you” when someone gives you directions, when a waiter serves you your drink, when someone moves over in a full train to offer you a bit more space and when your landlady offers you a biscuit with your cup of tea. You will see, being polite is more important than speaking correct English. As long as you are polite people will forgive you your grammatical errors and make a bigger effort to communicate with you.